and a Visit to His Grave

Copied from Rabbi Dan's Blog with the permission of Rabbi Fink.

Sunday morning, I set out to visit the grave of my great-great grandfather, Rabbi Yehudah Tzvi Finkelstein.  Thanks to my father's years of genealogical research, I've learned a bit about R. Yehudah Tzvi's life.  He was born in 1824, in Keidan, a largely Jewish shtetl north of Kovno in what is now central Lithuania.  Like his father, Shimon HaLevi Finkelstein, and eight generations before him, Yehudah Tzvi became a rabbi who studied and taught in Slabodka, the materially-poor but spiritually-rich Jewish ghetto of Kovno.  He was, according to family lore, a student of Rabbi Israel Salanter, the founder of the modern Mussar movement; later he would go on to teach this tradition to students of his own.

Together with his wife, Faige Rivka, R. Yehudah Tzvi had five children: daughters Chana Ettel, Reise (Rose), and Rachel Esther, and sons, Shimon and Mendel. Channa would later move to Palestine with her first husband.  Shimon Finkelstein followed in his father's footsteps, learning Mussar in Slabodka and receiving rabbinic ordination.  He emigrated to America and served Orthodox congregations in New York and Baltimore; his son, Louis Finkelstein was a pre-eminent American rabbi and historian, who was, for many years, the chancellor of the Conservative movement's Jewish Theological Seminary.  My great grandfather, Mendel Finkelstein, also became a rabbi and came to America, with the blessing of his renowned Lithuanian teacher, Rabbi Isaac Elhanan Spektor.  He settled in Dayton, Ohio with his wife, my great grandmother, Tobba (Tillie) Kagen, who grew up in Srednick, Lithuania, along the banks of the Nemunas River.  Their son -- my grandfather -- Rabbi Joseph Fink, broke with Orthodoxy, studied at the Reform movement's Hebrew Union College in nearby Cincinnati, and spent most of his illustrious career at Temple Beth Zion in Buffalo, New York, where he was a major public figure, teacher, and activist well beyond the Jewish community.
But to return to Yehudah Tzvi. . . this "Old Country" Litvak came to the United States as a widower in 1906, with his daughter Reise, her second husband and their six children.  He was 82 years old at the time.   He lived twelve more years in New York and died on the exact same secular date as my own father -- March 28 -- in 1918.
Dad's records told me that he was buried in the Old Montefiore Cemetery in Queens, in a section belonging to the United Hebrew Congregation of New York: Gate 148 N, Block 88, Row 20 R, Grave 20.  So that is where I headed from Bernardsville.
Well, the trip is not the arduous journey it would have been back in 1918, but it is still quite ashlepp.  After almost ninety minutes, twenty-plus dollars in toll, and way too many miles of decrepit pot-holed roads (where is all that toll going?) through the grim and graffiti-blighted bowels of the Bronx, I arrived at the cemetery.  I checked in at the office, where the thoughtful and accommodating receptionist very graciously outfitted me (contrary to the stereotype, I almost always find New Yorkers to be unusually helpful) with a map and directions to the section. 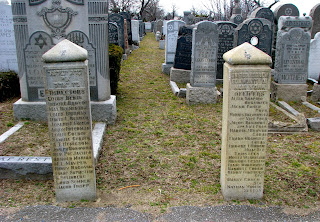 I parked the car, passed through gate 148N, and walked among crowded rows of tall, weathered, mostly-granite headstones to where my great-great grandfather's gravesite should have been and found. . . nothing.  I thought maybe I had counted wrong, but a recount of rows shed no new light.  So I made my way, slowly and carefully, through the entire section, probably containing over four hundred graves, examining each stone and searching for Yehudah Tzvi Finkelstein --- to no avail.  Eventually, I drove back to the office and asked if they would come out and help me, which they agreed to do.  Well, as it turns out, the grave is exactly where it is supposed to be, but the headstone has toppled over and is lying face down on the grass, partly covered with leaves, dirt, and moss, so I could not get even a glimpse of the inscription.  I was deeply disappointed, but there was nothing to be done, as the fallen headstone weighs hundreds of pounds, which ruled out the option of trying to raise or even move it.  To add insult to injury, at the very moment that I tried to take a picture of the sad cemetery scene, the batteries in my camera went dead.
I did leave a lovely round pebble, which I had taken from the banks of the Boise River before leaving home, atop the prostrate stone, as the traditional token of my respects, as if to say, Despite all this, I was here. As I did so, I imagined how utterly unfathomable it would have been to Rav Yehudah Tzvi Finkelstein to imagine his great-great grandson a Reform rabbi in Boise, Idaho.  Such is the mystery and miracle of Jewish history.
But equally unfathomable to my family patriarch would have been the presence of hordes of Hasidim buzzing around the cemetery where he is buried.  I wondered what brought them there, until one of them approached me and asked if I had put on tefillin that morning.   As it turns out, the last Chabad Lubavitcher Rebbe, Menachem Mendel Schneerson, is buried just a stones throw from R. Yehudah Tzvi.  Needless to say, his headstone is very well-tended, as it is a pilgrimage site for Lubavitchers from around the world.  A Talmudic Litvak and misnagid, my great-great grandfather was a undoubtedly a zealous opponent of Hasidism, which spread rapidly through most of Eastern Europe but failed to take hold in proudly rationalist Lithuania.  How ironic that he now lies in the shadow of the Lubavitcher Rebbe, who most Chabadniks actually believe to have been the messiah as they pray for his imminent resurrection and return.
I bid my great-great grandfather farewell and made the long, expensive trip back to Bernardsville, arriving just in time to shower and change for the wedding.  All in all, a bit of a frustrating day, but also educational.
And, just maybe, for the best.
For in the end, of course, no headstone lasts forever.  With the passage of sufficient time, even words etched deeply into the hardest rock are worn away by wind and rain.  Even the Ohel, the Chabadniks' venerating complex built over the Rebbe's grave, will one day yield to history and weather.
Of course R. Yehudah Tzvi's entire world in Lithuania is also gone --- not as a result of time's slow ravaging but, rather, the Nazis' swift and brutal annihilation.
I thought of all of these passings, slow and swift, as I reflected on my great-great grandfather's toppled headstone.  Perhaps my memories are somehow better --- more fitting --- than the picture I might have taken had my camera batteries lasted just an instant longer.  Perhaps the best that I can do is to just tell his story, to try to keep his memory alive for another generation or two.  And live up to that memory in my own personal and professional life as a rabbi and a Jew.
Zichrono l'vrachahMay his memory be for a blessing.
And in the sprit of his memory and fallen headstone, I will conclude with a favorite poem, by Jane Hirschfield:
The November Angels
Late dazzle
of yellow
flooding the simplified woods,
spare chipping away
of the afternoon-stone
by a small brown finch ---
there is little
for them to do,
and so their gossip is
idle, modest:
low-growing,
tiny-white-flowered.
Below,
the Earth-pelt
dapples and flows
with slow bees
that spin
the thick, deep jute
of the gold time's going,
the pollen's
traceless retreat;
kingfishers
enter their kingdom,
their blue crowns on fire,
and feast on
the still-wealthy world.
A single, cold blossom
tumbles, fledged
from the sky's white branch.
And the angels
look on,
observing what falls:
all of it falls.
Their hands hold
no blessings,
no world
for those who walk
in the tall black pines,
who do not
feel themselves falling ---
the ones who believe
the loved companion
will hold them forever,
the ones who cross through
alone and ask for no sign.
The afternoon
lengthens, steepens,
flares out ---
no matter for them.
It is assenting
that makes them angels,
neither increased
nor decreased
by the clamorous heart:
their only work
to shine back,
however the passing brightness
hurts their eyes.
**********************************************************

Afterward: Rabbi Fink received an email from the cemetary, telling him that they had been looking at the wrong stone, and that Rabbi Yehudah Tzvi Finkelstein's stone was standing after all. They included a picture: